It’s easy to rank jobs in any year according to who makes the most. We thought it would be more interesting, informative and thought provoking to measure how the salaries for various job titles have performed over time. Why? Because while the overall number is important, how we got to that number over time is just as important. We’re calling that “salary performance”. In an era of slow and stagnant wage growth, we believe that measuring salary performance is more than simply ranking highest salary to lowest. What’s just as interesting if not more so to us is how much and how fast any salary increased over a period. Particularly now, in these days of lack luster economic performance, sluggish growth, and little to no real income increase since the Great Recession, whether a job was rewarded with higher raises over the ten-year period that we looked seemed to be one pretty critical indicator of overall performance. Salary performance asks the question: what job titles are getting the consistently getting the big raises?
Fastest Salary Growth: The Methodology
We looked at the HRA-NCA Benefits and Compensation Survey database of close to a million observations collected since 2004. These observations are exclusively about companies in the Washington-Baltimore corridor. We then culled job titles for which we had consistent observations for at least 5 years against the following selection criteria:

The Results: Base Pay Rankings 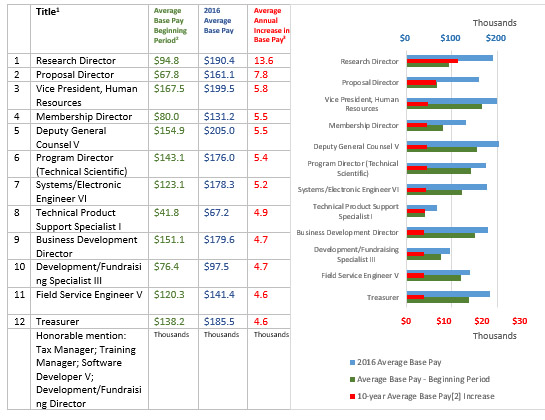 (1) Criteria for selection in this table: R-squared must be greater than .7; must have at least five years’ worth of continuous salary data.
(2)Starting year varies for each position. In order to be included in the group a minimum of five years’ worth of data must be available.
(3)All figures in thousand $

First, the rather sizable gap in the 10-year column from the number 1 to the number 2 is taken up by those C-suite jobs that we explicitly decided to set aside. Second, we have made no adjustments to reflect inflation or adjust to constant dollars.
By far the big winner in our analysis is Research Director (which should come as no surprise given the concentration of think tanks, lobbyists and trade associations in the DC region and their growing importance in the debates which consume the Capital). Research Directors began the decade with an average base pay of about $95,000 and ended the decade roughly $10,000 less than $200,000! 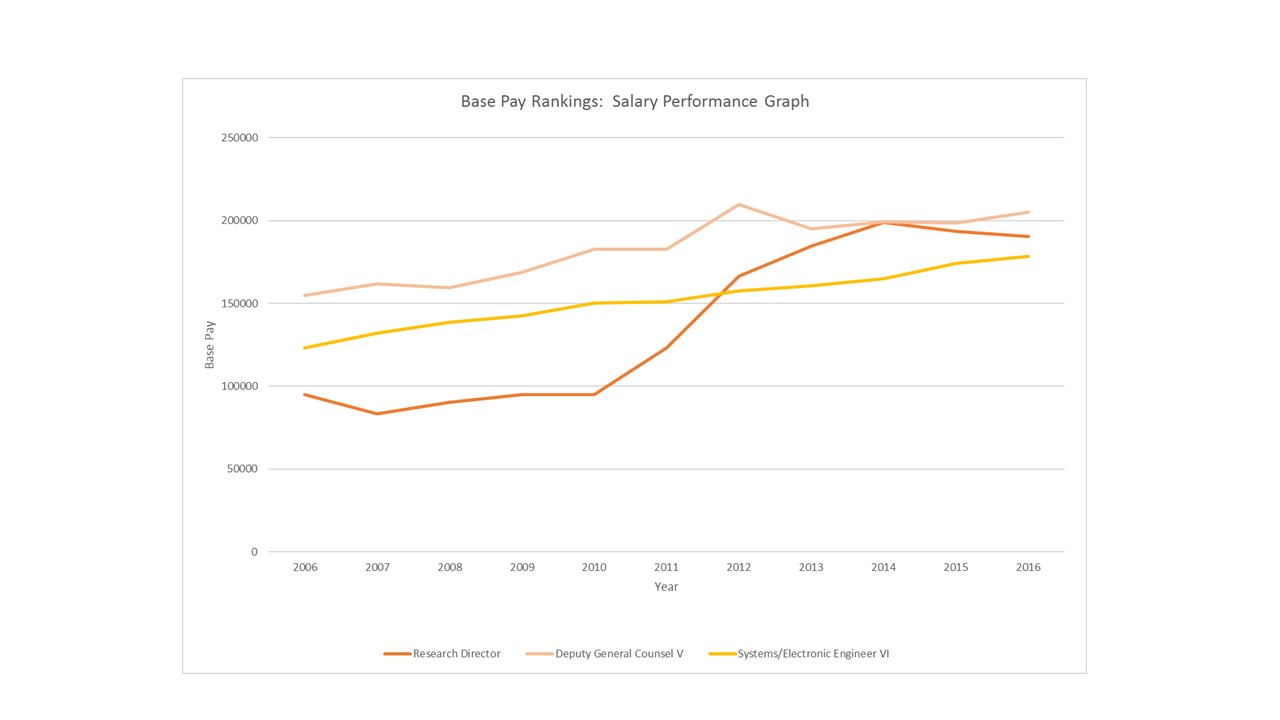 Comparing any of numbers one, two or three to the number five job title’s performance demonstrates the power of the steeper growth curve. For example, at the beginning of the decade there was a greater than $50,000 gap between the average base pay of Research Director (the number one) and Deputy General Counsel V (the number five). By the end of the decade that gap had closed to a little over $10,000. The effect is easiest to see in Figure 1. The Deputy General Counsel (number 5) and the Systems/Electronic Engineer VI (number 7) titles move roughly in parallel throughout the decade. The average salary for the Research Director title starts out well below both positions at the beginning of the decade. By the end of the decade it’s closed the gap on the top position.
It’s also worth noting that the Deputy General Counsel V is likely to see a greater share of compensation made up on bonus or incentive related components (see below).
Other observations worth noting:

What about IT? Legal?? Sales???
Notably absent from the list would be IT security related job titles, sales job titles, software development job titles, and legal job titles.
Even casual observers of the Baltimore-DC job market can tell you that IT security folks are experiencing an extremely rapid rise in compensation. And while we wouldn’t argue with that, we only included job titles for which we had sufficient data within at minimum 5 years. We also looked for minimum levels of linear relationships in the data (see below). The rise in IT security within the employment markets is a relatively recent phenomenon so the data for the period in question is just now developing. And there is a great deal of volatility in the reported compensation data, so the data tends to not meet our linearity requirements.
The other IT job title that one would expect to see would be software developer. The highest compensated software developer actually came in at number 15 on our list (behind Tax Manager, Trust Administrator II and Training Manager). And the difference in increase between the Software Developer title and the number 12 title on the list of Treasurer turns out to be less than $400 (compare that to the difference between numbers 1 and 5 on the list of over $8,000). So it’s fair to say that titles at the bottom begin to tightly cluster (which is why we included the honorable mentions).
The absence of sales job titles turns out to be a bit more complicated. We excluded some job titles which didn’t conform statistically. That is, for those job titles which had less of a linear relationship and had high levels of variability or volatility, we made a conscious decision to drop them from the list. Sales related job titles – not surprisingly – tended to have high degrees of variability. Also bear in mind that Business Development Director (number 9) is in fact largely a sales role.
Finally, the dearth of legal related job titles given the labor market in DC is surprising. The only job title to make an appearance being Deputy General Counsel V. But much like the sales related titles above, the legal titles were subject to large amounts of variability as well. Relaxing the linearity requirements that we impose would result in other legal related titles making the rankings. 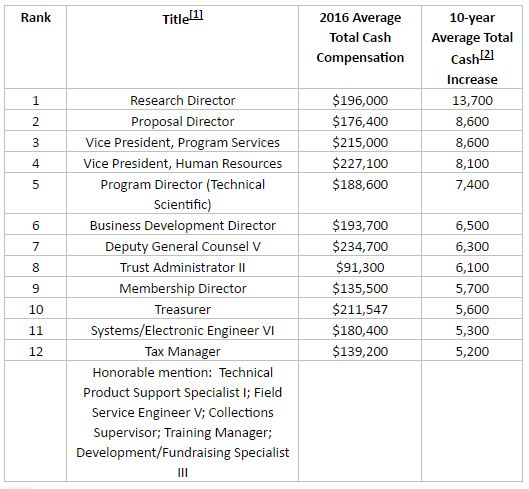 (1) Criteria for selection in this table: R-squared must be greater than .7; must have at least five years’ worth of continuous salary data.
(2) All numbers rounded to the nearest hundred.

Bonus and incentive compensation make a big difference in the top twelve salary performance. Three job titles are added bumping out three and several are significantly shuffled as a result. Added are the Vice President of Program Services, Trust Administrator II, and Tax Manager. Excluded are Field Service Engineer V, Technical Product Support Specialist I and Development/Fund Raising Specialist III. Business Development Director moves from number 9 on the list to number 6 as one would expect given the degree to which such job titles include significant variable compensation. Vice President, Program Services which barely missed making the list under average base pay rankings appears on the total compensation list at number 3.
Once again these results are pretty much in line with what we would expect from the DC metro area. Proposal writing and delivery is still very much the life blood of government contracting, business development is about creating the relationships that make it possible to deliver the proposals in the first place.
It’s also important to note that when certain requirements regarding linearity are relaxed many more jobs wind up included on the list. Several including In House Attorney job titles; Vice President, Sales; Lending Manager and Vice President, Membership to name a few.
Even with variable compensation introduced, the six figure job titles are still the ones with the steepest growth over the period in question.

Conclusions
The Washington-Baltimore corridor lays claim to some of the most lucrative employment in the country. Some of these job titles have shown noteworthy salary resilience even after the Great Recession and several of these job titles have shown remarkable growth as well. It’s a great time to be well educated because clearly all the jobs listed require extensive education and training. While many would point to the technology sector as sustaining the heaviest demand and salary growth, clearly the DC area rewards other disciplines, notably those well versed in the ins and outs of policy analysis (research director) the operation and management of associations and not-for-profits as well as many of what one would expect of the traditional DC career paths.